The Improbable Life of Grenville Dodge 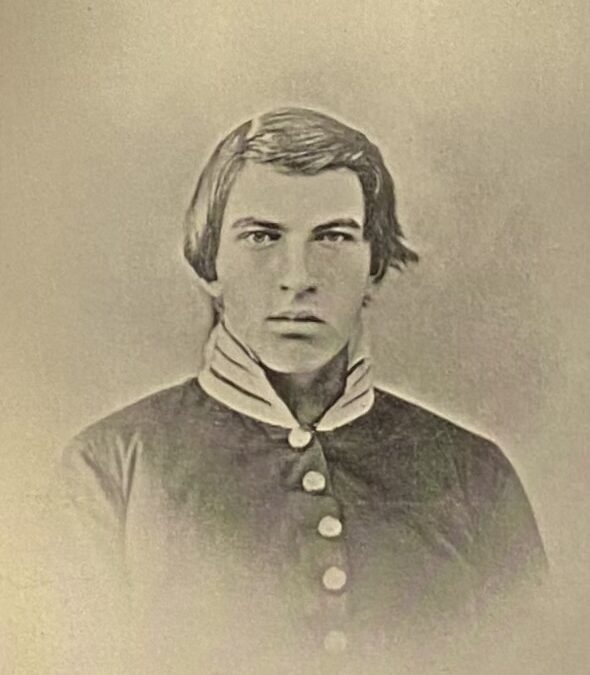 Major General Grenville Mellen Dodge was born in the Putnamville section of Danvers on April 12, 1831. His parents were Sylvanus and Julia Phillips Dodge. While he spent some of his childhood in Danvers and Rowley, he spent his formative years in South Danvers (now Peabody). His father was the Postmaster and owner of a local bookstore.

Dodge began work at age 10. In the summers, he drove a local butchers’ cart for Messrs. Lambert & Merrill. In the winter, he assisted his father in his bookshop. He also sold fruits and vegetables for the farm of Mrs. Edward Landers, later known as the Rogers Estate. His family lived at 34 Main Street, 126 Main Street and 11 Wallis Street.

Determined to go onto college, he studied in the evenings. He earned enough money to attend Durham Academy in New Hampshire from 1845-1846, and then graduated from Norwich University in Vermont as a Civil Engineer in 1850.

From there, Dodge headed west to Illinois, where he gained experience doing land surveys for the Illinois Central Railroad and Rock Island Railroad. He became Assistant Engineer of the Mississippi & Missouri River Railroad, honing his skills.

In his work, he could see the great potential of creating a transcontinental railroad. Dodge’s surveys and other technical reports were used to convince Congress to authorize the construction of the Pacific Railroad.

Dodge married Miss Annie Brown of Peru, Illinois in 1854. They settled in Council Bluffs, Iowa and had 3 daughters Lettie, Ella and Annie. Here, he formed the bank Baldwin & Dodge, which later merged with the Pacific National Bank.

He continued to work with the Union Pacific Railroad Company and became Captain of the Council Bluffs Guards in 1856. They would be one of the first units from Iowa mobilized for the Civil War. At the Battle of Pea Ridge, Arkansas, Dodge and his men fought for 3 days straight, March 6th, 7th and 8th, 1862. Dodge was injured when his horse was shot from underneath him.

During his recovery, Dodge was assigned to Columbus, Kentucky to rebuild the Mobile & Ohio Railroad, which had been destroyed. His skill and leadership came to the attention of General Grant, who appointed now Brigadier General Dodge to the position of General Engineer. General Grant relied on the information obtained by Dodge to inform his soldiers’ movements. 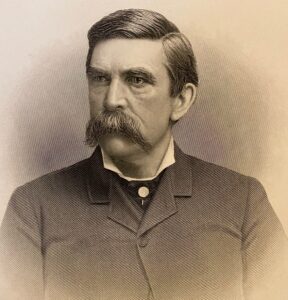 General Dodge had a unique set of skills that made him invaluable to General Grant. Dodge displayed bravery on the battlefield and keen leadership of his troops. Dodge was an expert in roads and railways, which were vital to getting supplies and taking advantage of the enemy. General Dodge led the command near Corinth, Mississippi and made one of the biggest Calvary raids of the war. His men destroyed 20 miles of rail tracks, essentially isolating Vicksburg from the east. When Vicksburg fell, Dodge was promoted to Major General.

General Grant in preparation for the Chattanooga campaign wrote to General Sherman, “Bring Dodge along. He is an officer on whom we can rely in an emergency.” High praise to be sure!

Major General Dodge served with distinction at the Battle of Chattanooga and was wounded at the Battle of Atlanta. Dodge traveled back to Peabody on October 26, 1864 as a large public reception and parade were held in his honor. This was a brief respite. In 1865, Dodge was put in charge of all the United States Forces in Kansas, Colorado, Nebraska, Utah, Montana and Dakota.

In 1866, when his service was complete, Dodge was appointed the Chief Engineer of the Union Pacific Railroad and was elected as a Congressman from Iowa’s 5th District. 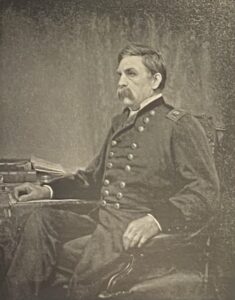 Portrait of General Dodge, hanging in the Iowa State Capitol

His work with the Union Pacific paid off. On May 10, 1869, the Union Pacific and the Central Pacific railroad met at Promontory Point, Utah, 1186 miles from its starting point at the Missouri River. In Andrew J. Russell’s iconic image of the event, “East and West Shaking Hands at Laying of Last Rail,” Grenville Dodge is at the center, shaking hands, the figure to the right. His work was vital to making the first transcontinental railroad a reality. 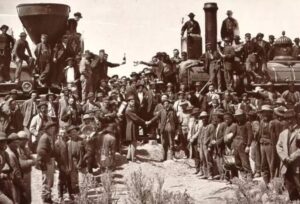 Andrew Russell’s “East and West Shaking Hands at Laying of Last Rail”; Courtesy of the Library of Congress

He died on January 3, 1916 in Council Bluffs, Iowa. He left an important legacy that forever changed the landscape of the American West.