Mary Ophelia Townsend was born on March 29, 1842 in South Danvers (now Peabody), Massachusetts. Mary was the daughter of Daniel Hacker and Rebecca Ophelia (Gould) Townsend. Mary, the eldest of three children, would take on more responsibility with her mother’s passing in 1850. Her younger brothers, Charles Hacker (1844-1893) and Eugene Putnam (1846-1896), enlisted in the Union Army. Charles was only 17 at the time and Eugene barely 15. 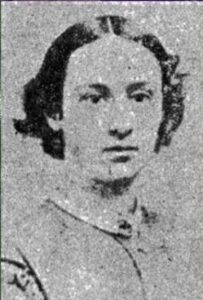 As a woman, Mary Townsend could not enlist, but she soon found another way to serve her country in the Civil War. Physicians desperately needed assistance in treating the growing number of wounded soldiers. Inspired by the work of Florence Nightingale during the Crimean War, social reformer Dorothea Dix organized a volunteer corps of female nurses. Mary Ophelia Townsend joined their ranks in 1864. She worked at the Seminary Hospital as well as the Columbia Hospital in Washington, D.C. 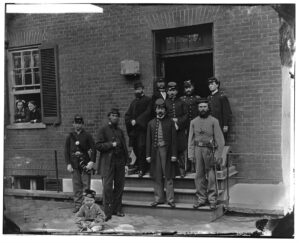 Seminary Hospital, Washington DC, 1861. Courtesy of the Library of Congress

However, once the war ended, she moved back to Massachusetts. She lived in East Boston, and likely met her future husband, Daniel Dickinson Stevens (1839-1916) there. He was a Navy Quartermaster. They moved back to Peabody a few years later. She and Daniel did not have children, but they took in Catherine Ellen Hackett as a ward when her parents and siblings all died of tuberculosis around 1890. Catherine lived with the Stevens family until her own marriage in 1907. 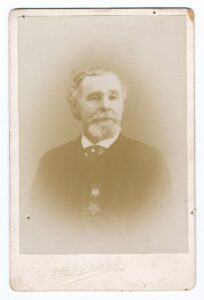 Mary lobbied much of her married life for her husband to be awarded the Congressional Medal of Honor for his acts of bravery at the Second Battle of Fort Fisher in North Carolina. Stevens fought valiantly and “he three times replaced the flag when it was shot away on the monitor Canonicus.” The USS Canonicus took 36 hits during the battle, but the Union was victorious. Due to Mary Stevens’s persistence, her husband received the Medal of Honor in 1916. 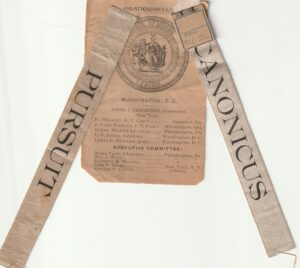 Ribbons given to Daniel Stevens upon receipt of his Medal of Honor, 1916

Mary Ophelia Stevens championed temperance as well as women’s suffrage. She formed the Peabody Suffrage League and acted as its President in 1889. She served on the Resolution Committee for the Prohibition Party of Massachusetts. Of the 15 members, only 2 were women. Mary traveled to St. Louis, Missouri on behalf of the Massachusetts delegation for the Woman’s Christian Temperance Union. 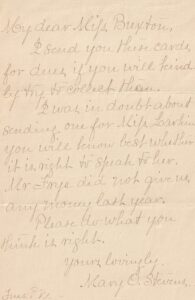 Letter from Mary O. Stevens to Mary Jane Buxton, in her own hand, 1893; letter is in regards to membership dues for the Peabody Women’s Christian Temperance Union. 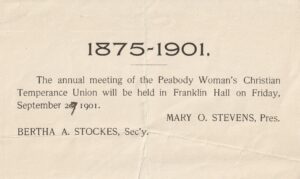 In 1913, Mary Ophelia Stevens represented all Civil War nurses at the 50th Anniversary of the Battle at Gettysburg. The Grand Army of the Republic bestowed ceremonial badges to the 25 surviving Civil War nurses in 1915. They displayed their regalia as they paraded down Pennsylvania Avenue in Washington, D.C. The women were recognized for their courage and dedication. However, the victory was incomplete. They were not considered equal citizens, as they did not have the right to vote. Mary Ophelia Stevens continued her commitment to women’s suffrage, by serving as the president of Peabody’s Women’s Suffrage League in 1915. 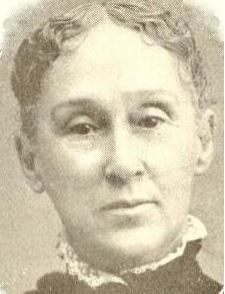 After years of struggle and sacrifice, the hard fought battle was won. The Nineteenth Amendment, giving women the right to vote, was ratified on August 18, 1920. A mere two days later on August 20th, Mary Ophelia Stevens registered to vote at Peabody City Hall.