What’s in a Name?

It feels like we have changed our name more times than the monument has been moved in the Square.  Today, let’s look back at the many names of Peabody, along with some special glimpses of what Peabody would have looked like.

English Settlement of Salem. Peabody was referred to as Northfields, The Farms or Brooksby 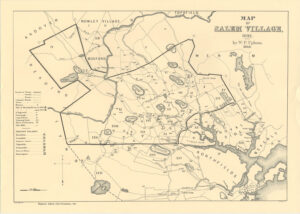 Courtesy of the Danvers Alarm List Company. Map created by WP Upham of Salem 1692 for Charles W. Upham’s Salem Witchcraft, With an Account of Salem Village and a History of Opinions on Witchcraft and Kindred Spirits (1867)

Formation of the Middle Precinct of Salem consisting of the area between Salem Village (now Danvers) and Salem Town.

Founding of the District of Danvers. The Middle Precinct became known as the South Parish of Danvers.

Official separation from Salem and incorporation of the Town of Danvers. Peabody was still known as the South Parish of Danvers. 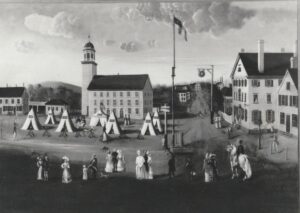 Sketch of Peabody Square area, circa 1848; Looking towards today’s Central Street, Lowell Street to the left and Main Street to the right

Official separation from Danvers and incorporation of the Town of South Danvers. 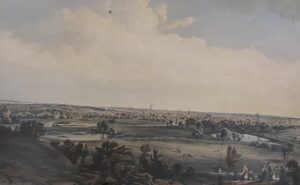 “View of South Danvers,” Print from Buxton’s Hill looking onto downtown Peabody, by J. B. Bachelder, 1856 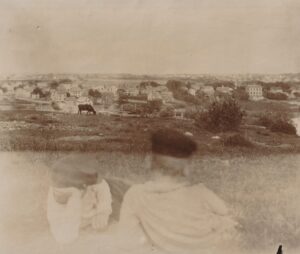 Photograph from Buxton’s Hill looking onto downtown Peabody, circa 1875

Change in name from South Danvers to Peabody after George Peabody

Incorporation of the City of Peabody