The Festival of Lights

Let us all share in the celebration and discuss the importance of the Jewish community to Peabody’s story. 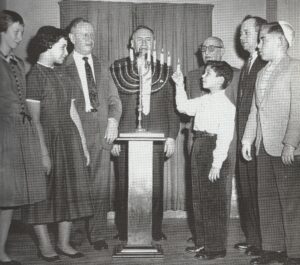 This year, Hanukkah will be observed from the evening of Sunday, December 18th to the evening of Monday, December 26th. The holiday celebrates the victory of the Jewish people in the second century BCE over the Syrian-Greek army. Following the war, the Jewish people re-dedicated their temple. The light in the temple was only meant to last a short time, as it was just small amount of oil. Miraculously, the temple stayed lit for 8 days. The holiday, at its core, is about light conquering darkness. 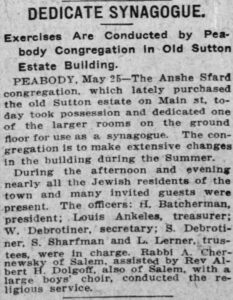 The first Jewish immigrants arrived in Peabody in 1896 from Russia. America held the promise of greater religious freedom and economic opportunity.

In 1909, the first Jewish synagogue was formed as the Congregation Sons of Israel. This was considered the “big” synagogue and was made up of mostly Lithuanian immigrants.

In 1913, the “little” shul (synagogue/school) was formed at 7 Little’s Lane, called the Congregation of Anshe Sfard, by Russian immigrants to Peabody.

By 1920, there were over 200 Jewish families settled in Peabody, from Germany, Russia, Lithuania, Poland as well as Sephardic Jews from Turkey. The Sephardic Jewish population created their own house of worship, the Congregation Tifereth Israel on Pierpont Street in 1922.

These immigrants came to work in the leather factories. Later, many of the factories were Jewish owned, such as Stahl Leather, Korn Leather, and Ossoff Leather, just to name a few.

After World War II, there were 400 Jewish families in Peabody. Many settled in the new housing developments of West Peabody.

Today in Peabody, there are four active synagogues and a Chabad house (a community center/place of worship). There are also various community organizations, including a Jewish nursing home and health complex on Lynnfield Street. Larry Levine’s, located at 474 Lowell Street, is the only kosher meat and deli business north of Boston and south of Montreal, Canada.

Peabody is truly a melting pot. From the first Jewish settlers in 1896 onward, each new group has added to the fabric of our city.

To see what local Hanukkah events will be taking place this year – check out this article by The Jewish Journal:

Hanukkah celebrations to spread light, joy, and pride throughout the North Shore

This is just a small piece of a larger story. Interested in knowing more?

In October of 2019, Alan S. Pierce gave a talk about the Jewish History of Peabody. We are grateful that Peabody TV filmed it, and it can be viewed here.

History of the Jewish Community of Peabody presented by Peabody Historical Society (cablecast.tv)

Alan S. Pierce, “A History of Boston’s Jewish North Shore”, on behalf of the Jewish Historical Society of the North Shore, 2009.