The History of Santa

This week, we delve into the history of Santa Claus. In modern times, Santa Claus can best be described as a jolly man with a white beard wearing a red suit, carrying a sack of toys. Until the 1800s, in America, Christmas was considered first and foremost a religious celebration. However, the imagination of two American authors changed how we view Christmas and good old St. Nick. 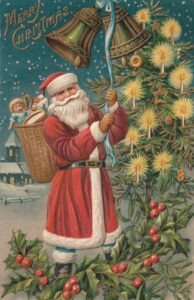 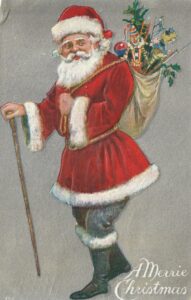 In 1809, Washington Irving, most famous for The Legend of Sleepy Hollow, wrote The History of New York. In it, he tells a fanciful story in which “good St. Nicholas came riding over the tops of the trees, in that self-same wagon wherein he brings his yearly presents to children.”

Irving went onto greater success with his work The Sketch Books of Geoffrey Crayon, published in 1820. In it, his main character travels to England and celebrates an old-fashioned Christmas- full of wine, carols, festive decorations and cheer. Charles Dickens remarked he was influenced by Washington Irving’s writings when creating A Christmas Carol. 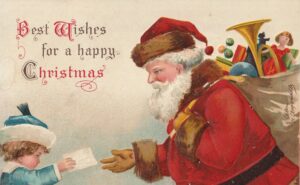 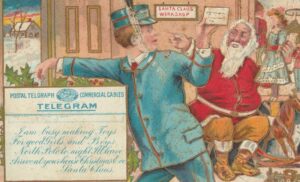 The second American author to play a role in modern Santa Claus was Clement Clarke Moore. You may not recognize his name, but you have surely heard his 1823 poem, “A Visit from St. Nicholas” or as it is popularly known “T’was the Night Before Christmas.” 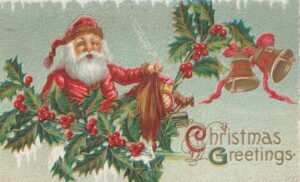 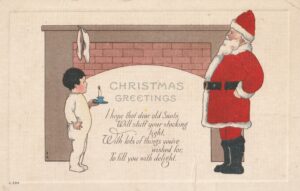 Lastly, who is responsible for Santa Claus’ iconic look? We can thank Thomas Nast, a cartoonist for Harper’s Weekly for that. In January 1863, Nast drew Santa in the Civil War battlefield. His Santa looks remarkably familiar to the figure we know today, long beard and jolly demeanor. Thomas Nast is said to have used himself as the model.

Thomas Nast was mostly a political cartoonist, so if you look closely at the image below, Santa is carrying an Army knapsack. This image was meant to be a social commentary on the lack of support the US Government was giving its enlisted military servicemen. It was a call for higher wages. 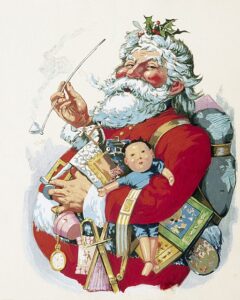 We hope you enjoyed this trip through the history of Santa Claus, and that

St. Nick is good to you this year.

Wishing you a wonderful holiday season and a happy New Year! 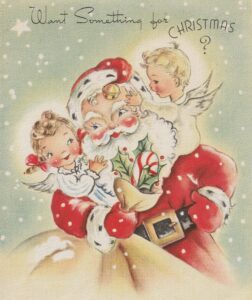 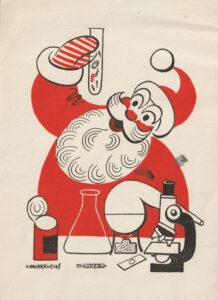 Copy of Image by Miguel Covarrubias.
Greeting card from Kathleen Woodbury via Consumer’s Union Publications, circa 1940